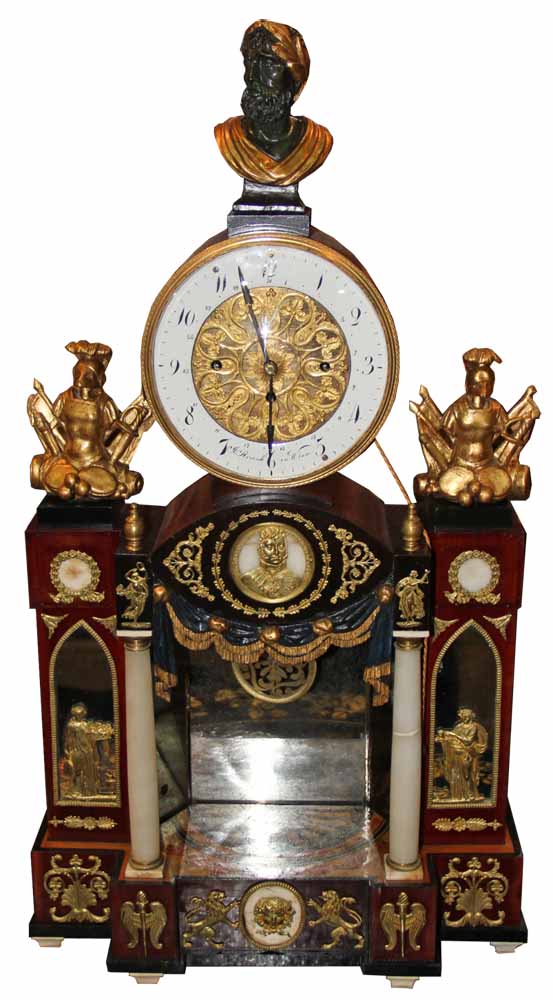 A 19th Century Hapsburg Monarchy Viennese Ormolu, Giltwood, Marble, Ebonized and Polychrome Palace Clock, the top crested with a victory bust, with a laurel wreath around his head, the bust above the clock face (marked “J. Araub in Wien”) above an ormolu on marble appliqué of Austrian Warrior and Diplomat Karl Philipp (flanked with conforming marble columns surrounding a mirrored and polychrome aedicaule) Phillipp became Prince of Schwarzenberg and was a legendary Austrian hero of the Hapsburg cavalry during the Napoleonic Wars, serving directly under Archduke Ferdinand. He received the Commander’s Cross of the Order of Maria Theresa and in 1809 was awarded the Order of the Golden Fleece, the Grand Crosses of the Order of Maria Theresa, an estate including multiple palaces, lodges and castles, and the position of President of the Hofkriegsrath. The clock is believed to have been part of the household furnishings of one of his many castles, most likely either Gilborn Castle in the Rhineland or his Cesky Krulov Castle in South Bohemia

© 2022 C. Mariani Antiques, Restoration & Custom
Any reproduction, copy, or duplication of this design is prohibited