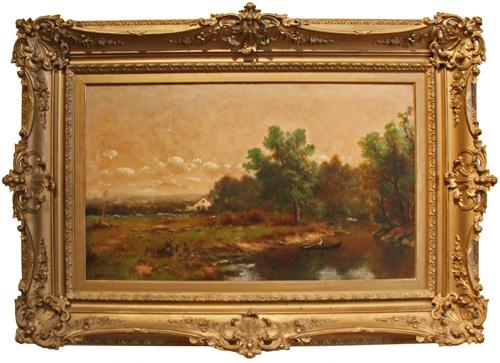 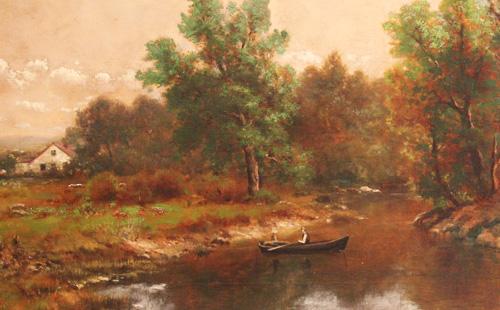 “Lazy Day” 19th Century Oil on Canvas by American Impressionist Thomas Bartholomew Griffin, b. 1858, d. 1918, and exhibited in the National Gallery Addl details: Thomas B. Griffin American, 19th Century. Thomas B. Griffin was born in Philadelphia, Pennsylvania during the last half of the nineteenth century. His first formal art education was at the National Academy of Design in New York. While at the Academy, Griffin exhibited his very well executed impressionistic landscapes. In 1896, he listed his address as 340 Fulton Street, Brooklyn, New York. It was during this year that Griffin exhibited “Views from the Catskills (from Haine’s Corners)” and “Hunter Mountain, Catskills,” at the National Academy. Thomas B. Griffin later moved to Baltimore where he opened a studio and established himself as a painter of impressionistic landscapes. Listed: The Dictionary of American Artists, Sculptors and Engravers, by Young Exhibition of the National Academy, 1861-1900, vol.1, pg. 367 Who was Who in American Art Mantle Fielding