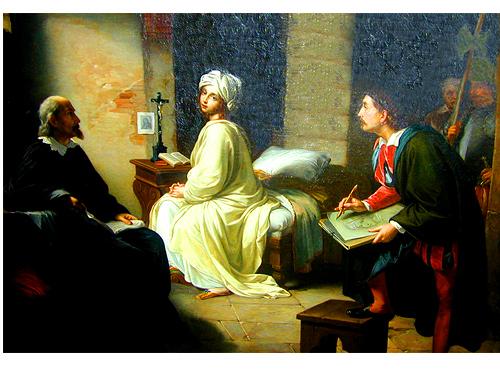 A 19th Century Italian Oil on Canvas, “Dante Sketching La Pia”, depicting the subject from Canto V of The Divine Comedy, where Dante meets the spirit of a lady of Siena who was imprisoned by her loveless older husband, Nello della Pietra, in a Maremma fortress on the Tuscan coast, and eventually died from his neglect . The open prayer book signifies her name, translated as “The Pious.” Here, the husband sits sternly while La Pia (allegorical for Dante’s muse Beatrice Portinari, the object of his lifetime secret and courtly love and devotion-he called her “the queen of virtue and salvation”. He met Beatrice at the age of 9 (she was 8), but never spoke to her again…she married her real life husband, Simon de’ Bardi, and died at 24, as did La Pia ) is sketched by Dante disguised as a nobleman